Most cellular proteins are synthezised in the cytosol as preproteins and guided post- or co-translationally to the respective subcellular compartments. Our research is focusing on cytosolic processes involved in targeting and transport of preproteins to chloroplasts, mitochondria and the endoplasmic reticulum.
Phosphorylation of preproteins

Heat shock proteins, such as HSP90 and HSP70 are molecular chaperones, which play an essential role in preventing protein aggregation and misfolding. HSP90-preprotein complexes interact with a number of co-chaperones until they interact with docking proteins at the mitochondrial and chloroplast surfaces, from where they are transferred to the import apparatus. Our research is focusing on the interaction of preproteins with the HSP90 chaperone machinerie and docking proteins.
Tetratricopeptide repeat (TPR) dockingproteins

TPR docking proteins are found in all organisms and mediate a first contact between preproteins/preprotein chaperone complexes and the import apparatus. Additionally to Toc64 (chloroplast) and OM64 (mitochondria) we have identified TPR7 as a TPR docking protein in the endoplasmic reticulum in plants. We are analyzing the role of these docking proteins in post-translational protein import not only on a functional but also on a structural level. 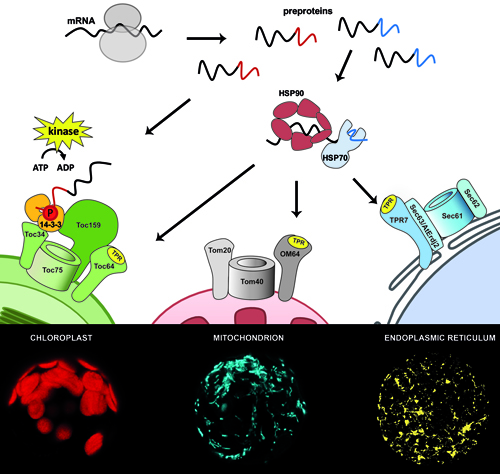 More information can be found here.